An Interview with Kristen Matta

By: Kenna McCarthy and Sierra McCaffrey

Sierra McCaffrey and Kenna McCarthy chatted with Simmons Communications Department alumna, Kristen Matta, to discuss how CommTracks was born. Matta graduated from Simmons in 2006 with a major in graphic design. She was the lead designer on the first CommTracks team. She now works as a creative director for tjmaxx.com.

What was your experience being on the first CommTracks team?

“It was kind of out-of-the-blue. I was in Studio 5; I used to do the advertising for CommWorks, and then I was in Studio 5 as a senior and it was a wide-open project assignment. My team wasn’t given a client. It was more so to come up with some great idea to showcase everyone’s strong suits. Danielle Sweeney was the writer on the team, I was the designer, and Kristen Schober was the PR MarComm person. As a designer, I was just like, ‘you know what?’ We made it through four years of school here and we’re really proud of all of our work, why don’t we do a mini project to showcase all of our great talent here in the Communications Department.

“So, we as a team came up with this whole idea to create a magazine showcasing all the seniors, our work, and the department as a whole. I think when we brought it to Professor Sarah Burrow’s attention, she was like, ‘haha, good luck with that, but we’ll totally support you.’ It was truly just a naive project that we brought to life. We did a lot of pitching as far as the idea went.

“At the time Sarah Burrows was the internship director and also directed Studio 5. We parallel pathed with her as well as Judith Aronson and all the other professors on how to go about this because we knew it was going to take some time as far as not just designing the project, writing the project, and getting money to pay for this project.

“We wanted to have the magazine professionally printed. We actually put together a mini-deck presentation, and we went to the Dean Diane Raymond and we did a little slideshow of what our idea was and she actually funded it. She gave us a $5,000 grant, I believe, and then we actually had Kristen Schober go out in the world and get some paid advertisements too. Not only did we have to come up with a design and a concept, we had to find a way to fund it because it was such a new initiative. I know it’s changed much since I started it, but I’m so glad it’s taken off. It’s such a great tool for not only the department but for all the students there who truly work hard through their four years.

“From there, honestly, it was just us spending nights in the CommLab. Danielle Sweeney sat and had interviews with every single senior in the Comm Department and wrote little features on them. They submitted work they were really proud of, and it was a really collaborative process where I was creating the template of the design and working with the printer templates.

“Now that I’ve been in the field for so long, I’m like, ‘Wow, I wish I could go back.’ We did a contest where we wanted to feature one student per track; there were four tracks back then. We just randomly pulled the names out of a hat, and those students who were picked from each track were going to be the feature on the cover. So, we brought them in and did a little photoshoot and that’s how they appeared on the cover.

How did this project influence the career you have today?

“I think it definitely helped influence me because I did three internships, with being a designer there are so many avenues you can go. I did one internship at WHDH 7News working with on-screen graphics and broadcast. Additionally, I did an internship for where I worked on layout for Boston Magazine. Then I did one at Corey McPherson Nash; they are a branding and innovation small agency that does work for start-ups and local identities. 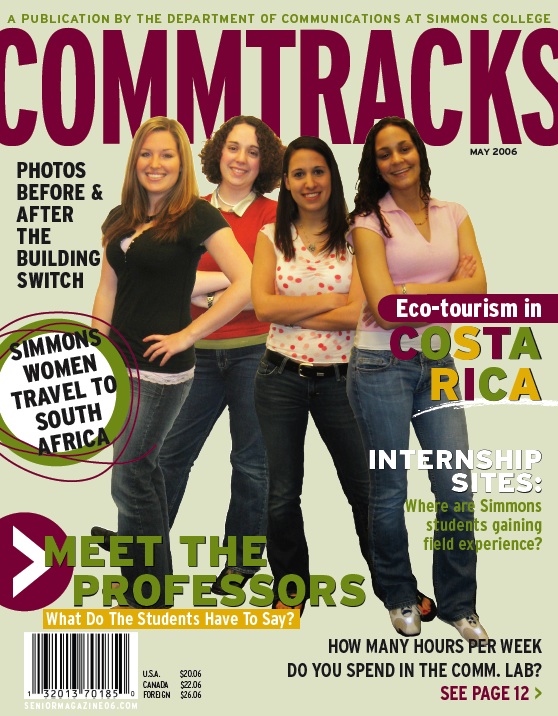 “So I remember being on CommTracks and bringing all those skills to life. I actually walked away with a true printed piece for my portfolio to bring to interviews and talk through the entire process from start to finish.

“I think that truly launched my career in design; not only to figure out what I am truly passionate about via the work, but it also gave me a leg up being a student right out of college. We all have student projects and we make them look wonderful, freelance projects we can make look wonderful, but to actually have a collaborative piece that I was able to talk about; it truly did launch me into my career because it set me up for success.

“Working with other people, pitching your work, getting funding for your work, all that is incorporated in the process from start to finish.”

Did you learn new skills when creating CommTracks?

“Oh — yes. Judith is such an amazing design professor; she definitely taught me the ins-and-outs, I would not be the designer I am without her, but it truly was a puzzle project. The CommTracks magazine encompassed the past four years of all the course work. Yes – I learned a lot- it was my first time working with an established printer. We would print stuff up in the CommLab but we would never send something to a printer and have to look at proofs, so it was a fantastic opportunity.

“As the 15 years have gone on, I have really been able to stretch myself to new promotions and take on big challenges. It started and grew from CommTracks, which itself was a big initiative to take on as a student. I carry that through my career! I started at two small agencies when I first graduated from Simmons and then I landed at TJX and I’m still there now and have been for eight years.

How have you changed professionally in the last 15 years?

“As a designer, you start at entry level after graduation, so I definitely took my skill sets that I learned from Simmons and that CommTracks project and brought it to life. I was able to show people I work for that I could do a project from start to finish, I could take big risks, and make it happen.”

Made by the 2020 senior communication students at Simmons University